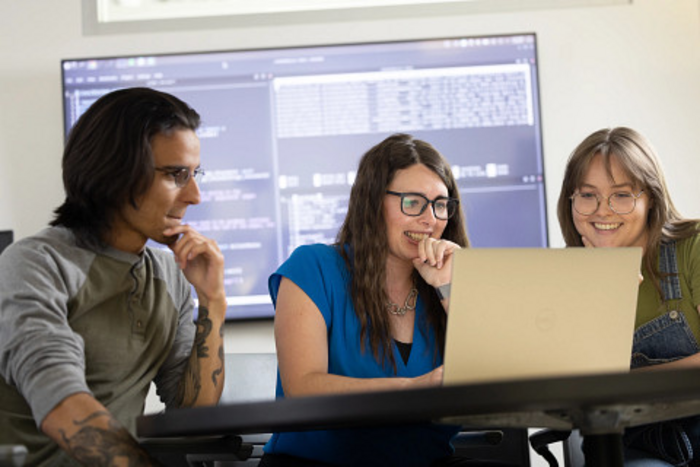 Despite a number of federally funded efforts to increase access to information and telecommunication (ICT) infrastructure across the U.S., studies show that rural communities—especially low-income households in tribal areas—are persistently excluded from access to the essential services and opportunities delivered via ICT. By not having equal access to a wide range of services, from healthcare to education to banking, these populations are experiencing significant digital inequities, affecting their very quality of life.

Computer scientist Morgan Vigil-Hayes, an assistant professor in Northern Arizona University’s School of Informatics, Computing, and Cyber Systems, was recently awarded a $561,599 grant from the National Science Foundation (NSF) for “A Community-based Approach to Empowered Information and Communication Technology Infrastructure Measurement.” The NSF CAREER award, the foundation’s most prestigious grant in support of early-career faculty, will support Vigil-Hayes’ research, which is focused on advancing social justice by improving access to broadband internet service for both mobile and desktop use.

One of the biggest challenges to improving access, however, is understanding how widespread the coverage gap is, both quantitative as well as qualitative. “In order to improve Internet access,” Vigil-Hayes said, “the first thing you need is an accurate baseline showing where service is accessible and the quality of access. And that’s a huge, huge challenge.”

Through her previous research, Vigil-Hayes has found that industry-based measurements of broadband services, as well as Federal Communications Commission (FCC) broadband maps, are highly inaccurate, especially in rural tribal areas of the Southwest. As part of a study conducted on the Santa Clara Pueblo in Española, New Mexico, for example, the research team flew drones and drove around the Pueblo with multiple cell phones to collect measurements, then compared them to the FCC broadband map—currently considered to be the standard. They found that coverage varied widely from the published figures, and in most cases, the FCC maps were wrong. Since then, Vigil-Hayes and her team have conducted additional comparison studies that also revealed significant differences between coverage documented on the published maps and actual coverage on the ground.

“A lot of these coverage maps are generated using models. Although that’s a relatively quick, inexpensive way to generate these maps, they’re just not very accurate.” And although policymakers, non-government organizations and others are collecting crowdsourced ICT infrastructure measurements as a way to better predict infrastructure availability, the resulting measurements are often incomplete, leaving out rural and tribal communities, and they don’t always reflect cost or quality—the information that’s most relevant to users.

There are many different tools available to individuals and communities to help measure broadband coverage, such as speed tests, but Vigil-Hayes and her team are finding that people just don’t know how to use them or are not motivated to use them.

“I am coming at this problem as somebody who is both an expert in measuring networks as well as an expert in human-computer interaction to understand the barriers to using these tools, whether there are incentives that would get people to use these tools and understand user concerns such as privacy and anonymity. Nobody has really dug into this issue, but if we’re ever going to get better internet in this country, it’s something that needs to happen across the U.S. So, I saw it as this really interesting challenge that bridged things that I care about and offered the opportunity to make sure we’re focusing on the actual people that want and need to use the Internet.”

Vigil-Hayes and her team—Kylie Cook, who is pursuing a MS in Computer Science and student Quinton Jasper, who is pursuing a BS in Applied Computer Science—will tackle these challenges by adopting a participatory action research (PAR) methodology carried out in three phases, or strands. Their overall objective is to determine how researchers, policymakers and community advocates can design crowdsourced ICT infrastructure measurement activities that result in a more representative set of measurements. By designing a pilot system that is based on the needs of community stakeholders, ultimately, the project will transform approaches to how infrastructure in general is monitored in the U.S., especially by those communities who suffer most from infrastructural inequities.

“It’s one thing when individuals across a large area report outages or spotty internet service,” Vigil-Hayes said. “But if we’re able to bring people together to gather data and bring it forward collectively, that is a very powerful statement to the federal government, to the FCC, who’s trying to subsidize the broadband deployment efforts. It would enable us to say, hey, you said you were spending X million dollars, X billion dollars on rural internet. Why does it still look like this?”

“I think there’s a huge community-advocacy piece to this project, and I want to help communities work together and collectively advocate for themselves, because in the U.S., it can be really hard to overcome network issues—largely because there are only a few major providers of mobile and fixed broadband. But I think there’s a lot we can do as citizens. We just need to build tools that empower that type of action and educate people on using them.”

Education plan based on research findings

The award will also support the development of citizen science-oriented curriculum based on the project team’s findings, introducing students to concepts from computer networking, including network measurement, wireless network spectrum allocation and the impact of networking on policy. By focusing on framing network measurement and monitoring as a citizen science activity similar to environmental monitoring, Vigil-Hayes hopes to engage a broader audience with computing by connecting computational thinking and activities that promote social good.

Vigil-Hayes will also develop a problem-based undergraduate course for NAU focused on ICT measurement that seeks to engage interdisciplinary audiences in computational thinking and challenges, potentially acting as a segue into undergraduate computer science or informatics programs.

The education plan is also designed to promote and support participation in computing among historically excluded students, particularly Native American students and students from underserved rural communities. Working through the university and building on her past experience as a research mentor, Vigil-Hayes will actively recruit and mentor undergraduate and graduate students from underrepresented minority groups as part of her research group.

Founded in 1899, Northern Arizona University is a higher-research institution providing exceptional educational opportunities and outcomes in Arizona and beyond. NAU delivers a student-centered experience to its nearly 30,000 students in Flagstaff, statewide and online through rigorous academic programs in a supportive, inclusive and diverse environment. As a community-engaged engine of opportunity, NAU powers social impact and economic mobility for the students and communities it serves. The university’s longstanding history of educating and partnering with diverse students and communities throughout Arizona is enhanced by its recent designation as a Hispanic-Serving Institution (HSI). Dedicated, world-renowned faculty and staff help ensure students achieve academic excellence, experience personal growth, have meaningful research and experiential learning opportunities and are positioned for personal and professional success. Located on the Colorado Plateau, in one of the highest-ranked college towns in the country, the NAU Flagstaff Mountain Campus is truly a jewel of the Southwest.